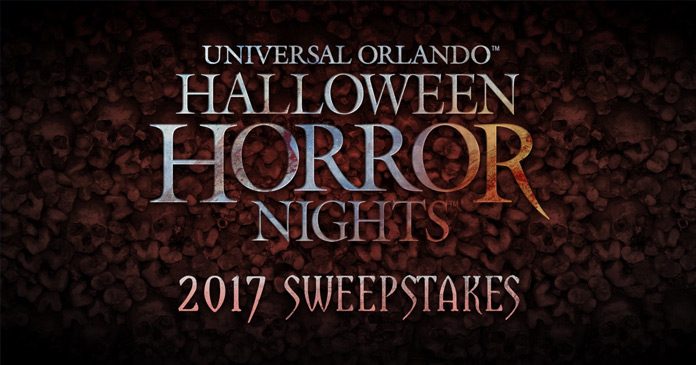 Plus, a few other lucky winners will get a 2017 Halloween Horror Nights prize package including a t-shirt, lanyard, Uni-Mini as well as a Universal Orlando Resort gift card.

More About This Universal Orlando Sweepstakes

Want to know more about Universal Orlando’s Halloween Horror Nights 2017 Sweepstakes? Check out the details below.

The Sweepstakes is open only to legal residents of the 50 United States of America and the District of Columbia, who as of the date of their entry into the Sweepstakes are 18 years of age or older.

There is a limit of one Entry per person per day.

One potential Sweepstakes Grand Prize winner and 7 potential First Prize winners will be selected in a random drawing held on or about 9/5/17 by West Coast Marketing, an independent judging organization.

Potential Grand Prize and First Prize winners will be notified by email and/or telephone within 3 business days of the conclusion of the random drawing.

One Grand Prize is available to be awarded in this Sweepstakes and consists of a trip for the eligible Grand Prize Winner and one Travel Companion to Universal Orlando Resort in Orlando, Florida to experience Halloween Horror Nights 2017. Trip will include round trip coach class air transportation from a major commercial airport near winner’s home to Orlando, FL; 3 consecutive nights hotel accommodations at an on-site hotel; non-exclusive ground transportation (via Universal’s Superstar Shuttle) to and from airport and Hotel in Orlando, FL; 2 admission tickets to experience 2 nights of Halloween Horror Nights 2017 including Halloween Horror Nights Express Passes for each ticket; two 3-Day 3-Park Park-to-Park theme park tickets good for admission to Universal Studios Florida and Universal’s Islands of Adventure theme parks and Universal’s Volcano Bay water theme park; and 2 tickets for the Scare actor Dining Experience. The Approximate Retail Value of the Grand Prize is $2,596.08.