How To Enter : Visit wheeloffortune.com/millionairemaker and follow the instructions.

Eligibility : Wheel of Fortune Millionaire Maker Sweepstakes (“Sweepstakes”) is open only to permanent legal residents of the United States (“U.S.”), the District of Columbia (“D.C.”) and Canada (excluding Quebec, Puerto Rico, Guam and all other U.S. and foreign territories and possessions) who are currently physically located and residing therein, who are twenty-one (21) years of age or older as of April 7, 2013 and who have provided valid proof of age acceptable to Casino

Twenty (20) winning Sweepstakes puzzles (two (2) per Show date) will be revealed on the ten (10) Shows telecast during the designated “Sweepstakes Puzzle Reveal Weeks.” After verification and validation as set forth above, each individual who submitted a valid, original and unaltered Game Piece matching one (1) of the designated Sweepstakes puzzles (or as necessary a Supplemental Second Chance Drawing verified entrant as fully described below), will be declared a winner and receive $50,000 U.S. (awarded in the form of a check made out in the name of the winner) and a trip for winner and one (1) guest to Las Vegas, Nevada from August 23, 2013 – August 25, 2013. (subject to change) (“First Prizes”).

Each trip consists of round trip coach class air transportation for winner and guest to/from a major commercial airport near winner ’s residence to Las Vegas, Nevada (actual airport near winner’s residence to be determined in Sponsor’s sole discretion); two (2) night standard accommodations (single room/double occupancy in Sponsor’s sole discretion room and tax only) in the new Octavius Tower at Caesars Palace (room type/tower based on availability; at the time of check-in, guest will be required to provide the hotel with a valid credit card); two (2) tickets to a Caesars headliner show while in Las Vegas, Nevada (actual show to be determined by Sponsor in its sole discretion); a dinner at Bacchanal Buffet (or similar) for winner and guest (actual restaurant determined by Sponsor in its sole discretion; not to exceed $150.00 USD, alcohol and gratuity not included). In addition, each such winner will also have a chance to win an additional one (1) million dollars ($1,000,000 U.S.) (awarded in the form of a check made out in the name of the winner) at the Millionaire Maker event at Caesars Palace scheduled to take place during trip (“Event”). The total approximate retail value (“ARV”) of each First Prize is fifty five thousand dollars $55,000 U.S. 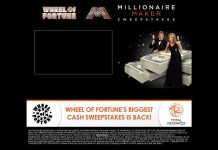 What Are The Starbucks For Life Rare Pieces 2021?