Although the Lay’s Passport To Flavor is officially beginning on August 1st, you can already start banking “miles” and collecting “passport stamps” using bag codes. While miles can be used to enter a feature prize drawing, passport stamps must be collected in order to win a trip to one of four amazing destinations. But first, you’ll have to get a Passport To Flavor Rare Stamp!

Will you be able to collect the hard to get winning passport stamps? There’s only one way to find out!

In order to win a “Collect And Win” prize, you must collect all 4 unique Passport Stamps for a Country. Collecting the first three stamps for each Country shouldn’t be too hard if you have enough bag codes to enter. Each bag code entry result in 1 passport stamp. However, the fourth and rare Passport Stamp will be much harder to get.

Here’s how it works. For each prize, there will be 2 random winning times between July 18, 2016 and October 16, 2016 for the remaining Passport Stamp for each Country. If you are the first participant to enter a Combination Code at or after the randomly generated winning time, you will receive the winning Passport Stamp. In addition, you must have already collected the other 3 unique Passport Stamps for that Country. 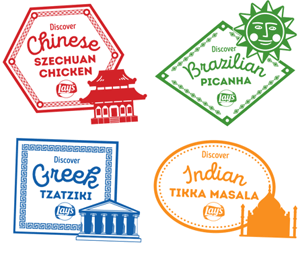 So which stamps are the rare ones in the Passport To Flavor Promotion? Check out our list below!

As you can see, these stamps represent national symbols. And if you can get them, you could well be the potential Collect and Win Prize winner for that Country.

Speaking of prizes, are you wondering what you could win by collecting all those stamps? Find out below!

Now that you can what are the rare Passport To Flavor stamps and what you can win, grab your bag codes and enter today for your chance to win!

For more information on the Lay’s Passport To Flavor, including official rules, visit www.lays.com now!