How To Enter : During the Promotion Period, visit WinYourChevy.com (“Promotion Website”) and follow the links and instructions to complete and submit the registration form including a valid home address (P.O. Boxes are not permitted).

Eligibility : Get Driving! Win a Silverado! (the “Sweepstakes”) is open only to legal residents of the fifty (50) United States and the District of Columbia who are at least eighteen (18) years of age or the age of majority in their state of residence, whichever is older, as of the date of entry.

Limit : Each entrant may receive a maximum of two (2) Sweepstakes entries during the Promotion Period

ONE (1) GRAND PRIZE: The Grand Prize will consist of the following two (2) elements:
a. A Dale Earnhardt Jr. personalized 2013 Chevrolet Silverado Half-Ton Crew Cab LTZ 4×4. Approximate Retail Value (“ARV”): $ 49,540.
b. A trip for two (2) to attend the 2012 AAA Texas 500 at Texas Motor Speedway. Trip package includes round trip, coach-class air transportation for two (2) from a major airport near winner’s home (determined by Administrator in its sole
discretion) to a major commercial airport near Fort Worth, TX for four (4) days and three (3) nights’ accommodations at a hotel determined by Administrator in its sole discretion (single room, double occupancy); two (2) tickets to the 2012
AAA Texas 500, including trackside meals and hospitality; a meet and greet with Dale Earnhardt Jr.; and $500 in spending money.
Total ARV of the Grand Prize: $52,515. 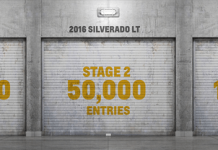